THEThe world of management video games is becoming increasingly popular in the videogame field. Everyone can manage any team (from football to Formula 1) and try to bring it to success. But what happens when the management regards Superbike? Let's find out in our SBK Team Manager review

Produce a management video game that engages the player to find the right tactics to better face each race. Surely this was the goal of Digital Tales, when it started producing the brand new SBK Team Manager. The app, available for both Android and iOS, was released a few days ago and we from Playerzdominiance we had the opportunity to test it for you. Let's see how this title behaved through our review.

SBK Team Manager: an engaging but repetitive gameplay for this management system on Superbike | Review

The first step, obviously, is that of start a team, choosing the name, the emblem, the colors and the manufacturer you want; then the first “logistical approaches” (typical of management software) will begin, which will range from the choice of a competent pilot and a mechanical manager, up to the more delicate question of sponsors (with objectives for each race or for the championship) that will accompany us throughout our championship. The target of the game will be to win a team championship before four seasons. 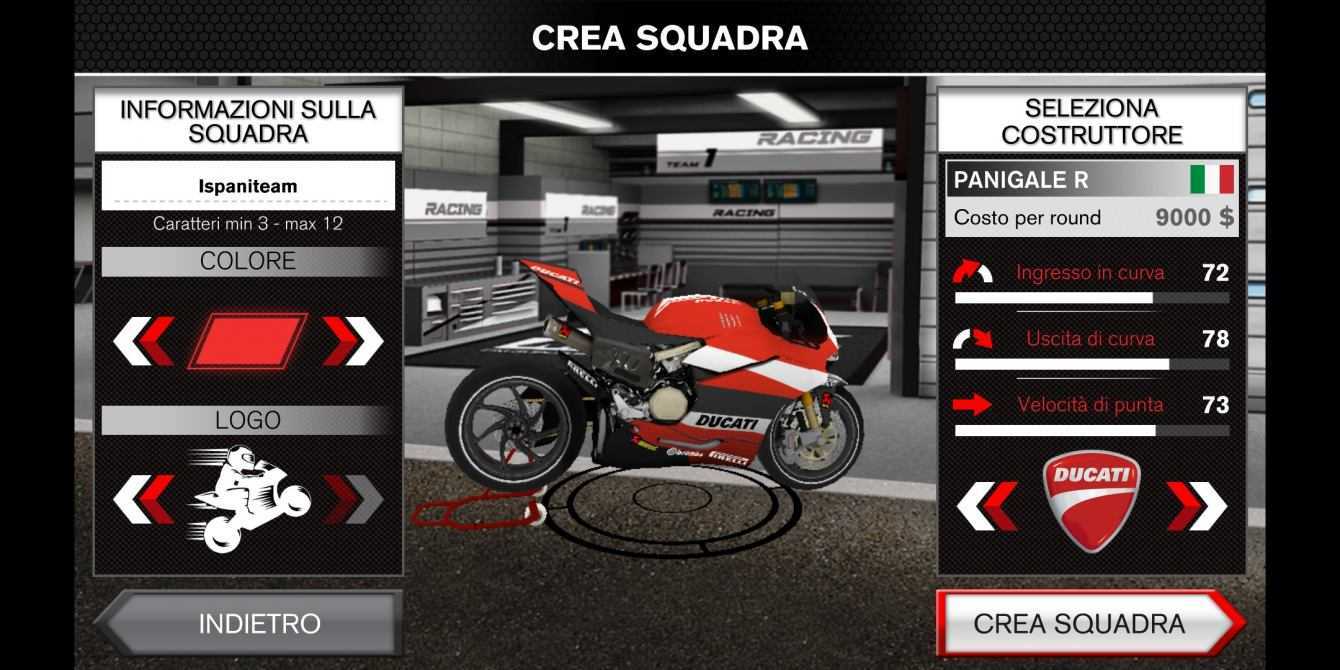 The main screen will be divided into 3 sections accessible by sliding your finger to the right or left. The first section will concern our “Team 1“, Made up of the pilot and manager previously chosen. Here we can manage contracts of our subordinates, order mechanical parts for our bike that will improve performance or improve the team of mechanics employees of the same.

In the section on the left we will find the hospitality (divided into 4 departments), a very useful area to have benefits both in terms of money and speed of shipments, and to obtain more easily fame points, very useful to unlock new improvements and the very useful “Team 2”Which will be located in the right section of the main screen. Fame points will be our real goal at least for the first few seasons. We can immediately get two for each race by improving our hospitality, while the others they will be directly proportional to the points obtained in the race.

Each circuit of the world championship will require the improvement of some characteristics of the bike; these are entering the curve, the exit from the curve and the straight speed. Depending on the circuit we will have to improve one in particular during free practice. Qualifying instead will be a “test of skill” as we will have to try to get our driver off the track when there are fewer bikes on the circuit and when his concentration is maximum, which is not always possible. 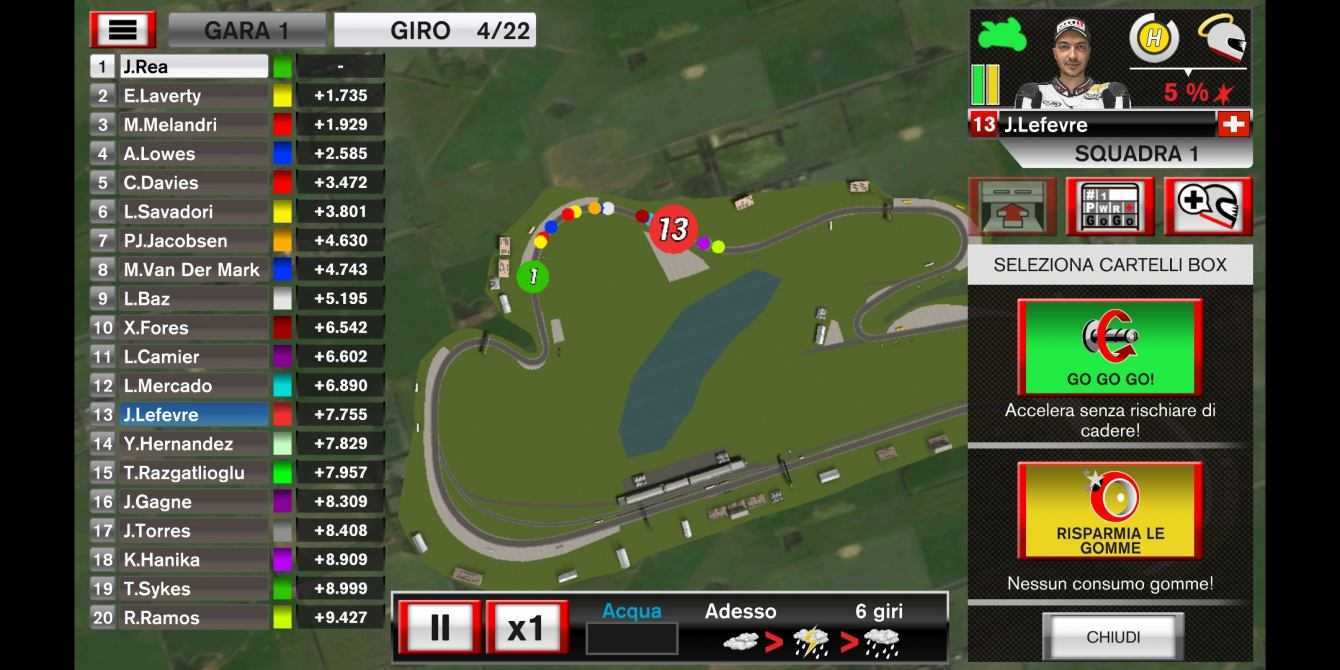 The race, on the other hand, is another matter entirely. We can decide with which tire to face it depending on the abrasiveness of the asphalt and the weather conditions that may change during the same, forcing us to a mandatory pit stop. Both before and during the race we will be able to choose which tactic to let our driver use, if one aggressive (high risk of falling and high tire wear) or one more calm and defensive (less risk of falling and reduced tire wear). During the race, however, there will be unexpected events like engine failure and falls that will cause us to end the race or sudden punctures and electrical faults that will instead force us to a pit, making us end the race in last position, but without having to pay a penny for repairs.

To complete everything there will be the “orders from the wall“. These two particular commands will allow us to perform some actions that can influence (even heavily) the course of the race. The first order will allow us to run at full speed without ever being thrown from the saddle (very useful if we combine it with an aggressive tactic), while the second will go to cancel what is the tire wear during the period in which it is active (making us slow down a lot).

SBK Team Manager: let's take a look at the technical part of this management system on Superbike | Review

There graphics of this game is very simple (as it should be). The details of riders and their bikes are reduced to the bone, but still make the viewing experience pleasant. The circuits and the details of the track are also very poor and skinny, but the choice was appreciated as it lightens what would be an app too bulky to be managed on a low-end mobile phone.

The audio it is essential. During the race i noises are almost imperceptible (except on departure), while i acoustic signals that warn us of any event they are well audible. The music instead turns out to be too high and in the long run unnerving. THE commands they are simple and easy to understand and can be activated at any time, even while the game is paused.

We have now come to the end of this review of SBK Team Manager and the time has come to draw some conclusions on this management dedicated to Superbike. The game presents itself well structured and it's a lot easy and intuitive. Although choosing a strategy is not exactly a difficult task, the various unforeseen events (rain, punctures, broken parts and falls) can change what is the event of a race that now seems over. 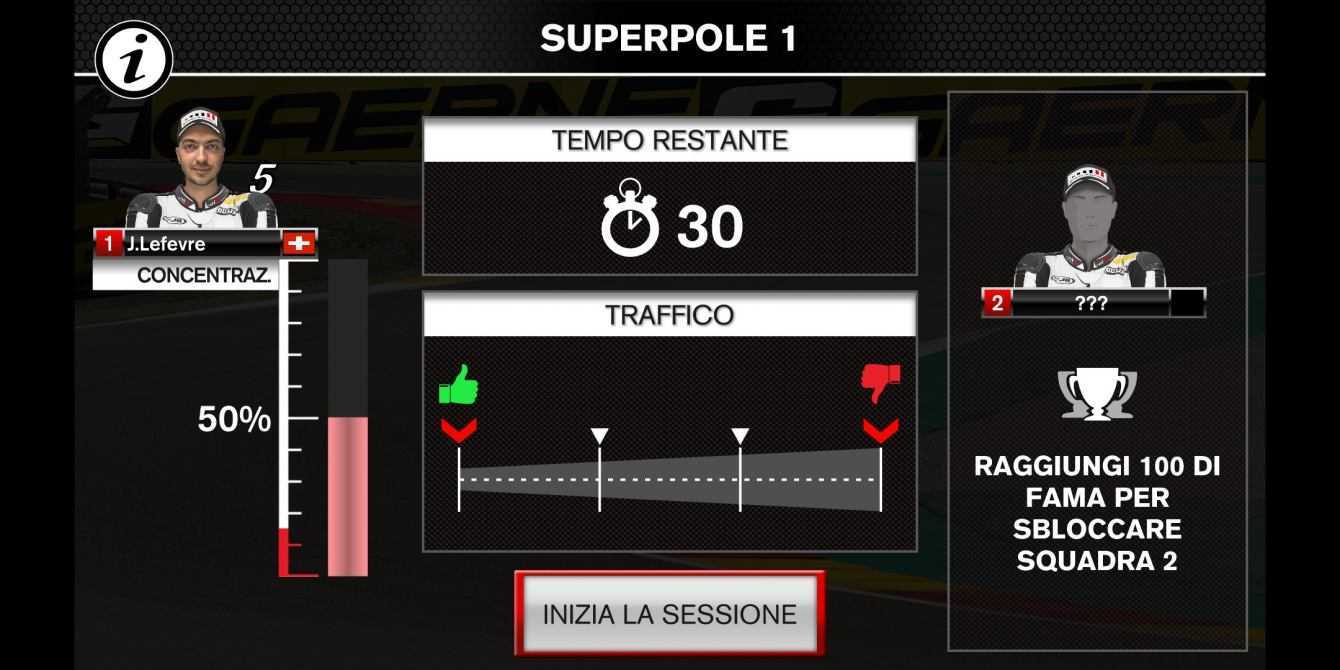 Good initial difficulty of the game that will make us sweat a lot before being able to get on the podium (or get some points). Excellent also the possibility of being able accelerate your running speed. A first negative note comes from the combined management of the two pilots, not too clear and often chaotic, but also from the “longevity”Of the game that in the long run is repetitive. However, it remains a good title that I recommend to lovers of the genre.

We remember that SBK Team Manager is available for Android is iOS. To not miss any reviews, continue to follow the pages of Playerzdominiance!

[Review] Predator: Hunting Grounds – If he can be hurt, he can be killed

A trailer for DC FanDome has arrived