Skip to content
Cheats and Tricks
Playerz Dominiance
No Comments

Fall Guys has become one of the most demanded games of the moment and in which fun is more than assured in each of its minigames. It is clear that the important thing is to have fun, but we all love to win in order to get more points and crowns to exchange for suits. That is why in this guide we are going to give you all the indications for win the Lava Escaladora event.

The Lava Escalator minigame is another one that is part of the category “Race” and it is one of the tests that can generate more problems for you due to the number of obstacles that this kind of mountain has. The goal will be to climb it at full speed by its path in the form of a zig zag while a lava does not stop rising covering the entire stage.

This means that it is one of the most tricky levels due to the fact that if you touch the lava you will automatically lose. Here there will be no second chances as in other phases in which if you fall you will reappear. However, if you do the course calmly, you should not have problems reaching the end, despite the enormous number of players you will come across.

In the first section you will come across some yellow mats and a little higher with three platforms that enter and exit the wall. A shortcut is to jump over those yellow triangles that you will see so that you will bounce off and save yourself from having to cross those protruding walls. The downside is that many users will try to carry out this same tactic and between impacts and others it is likely that it will be difficult for you to take this shorter path. It is recommended that you opt for it if you start from the first, but if not, it is best that you go the long way. 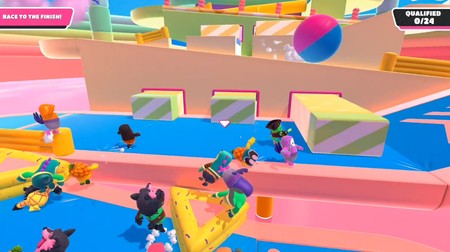 From there you will go to a second section with some balls that shoot out of a cannon. Because they go out very often, their thing is that, apart from having reflections and a lot of attention to the place they will descend through, stand on the right side from the screen, because if you are on the left and one hits you, you will run the risk of falling, which would mean starting over.

The third section is similar to the first with some walls coming out of the wall. The difference is that there are only two here, but between each one there is a gap, so you will be forced to perform precise jumps and at full speed if you don’t want the blocks to drag you. From the first hole you can jump directly to the area of ​​the first wall, but again in this section many people gather and it is likely that it will cost you, so we only recommend that you shorten the path if you do not have many players by your side. Also, be very careful with the patterns of the walls, because do not move at the same speed and that can cause you to be pushed down.

In the fourth section you will see a series of conveyor belts that move towards the previous section, so that you can fall down if you are not careful or if you move in the same direction as the arrows. It shouldn’t be difficult if it weren’t for the a few pivots that move from left to right and quite fast, so you have to try to dodge them no matter what. The best thing is that you go close enough to the right at all times so that, in case of error, you have time to react before rushing down. 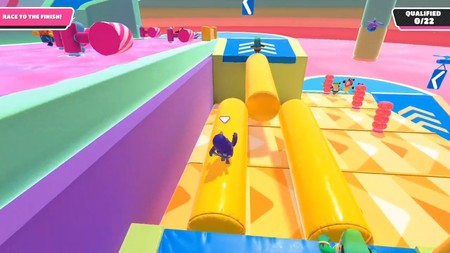 The fifth section is probably the most complicated of the whole level because it has a total of three rollers. By now the players will be more scattered, but we recommend that you jump on these yellow trunks only if you don’t have anyone by your side, because the slightest push will make you fall to the tapes from before, which is also a good strategy if you want to annoy someone. Also, since you have to hold your balance well, you have to try to place yourselves in the center off the reels or else your character will slip and fall.

From there we go to the sixth section with a floor full of gelatin that will cause us to slip and hammers that will not stop spinning. Patience is decisive in this part of the level, but again it is best that you go the closest to the right to avoid that the impacts of the mallets throw you and you have to repeat the part of the happy rollers.

The seventh section will be familiar to you because it is again made up of a series of blocks that go in and out of the wall. The difference is that here there are four of them, very close together, with little space to move and precisely the walls move quickly, so the ideal is that go through them one by one, calmly, and at the right time so they don’t hit you. 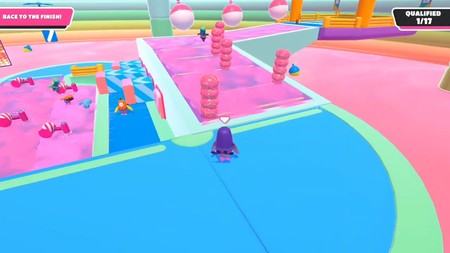 In the last section of this minigame, even if you see the finish line a stone’s throw away, you have to be careful because here the sides are surrounded by lava. First you will see some pivots that the best thing is that you go through it one by one, although you can also take advantage of the inertia that gelatin slips to cross this part faster, but only if you see it very clearly, because at that speed a minimum impact will cause your character to destabilize and fall down.

Finally, a few steps from the end they will appear some giant balls that will move from one side to the other. Because their movement is somewhat slow, you shouldn’t have any problem going through them one at a time and thus go through the phase, unless there is some player blocking your way, something that we already warned you that it is usually very frequent, so be very careful with them.