Skip to content
Cheats and Tricks
Playerz Dominiance
No Comments

Fall Guys has become one of the most demanded games of the moment and in which fun is more than assured in each of its minigames. It is clear that the important thing is to have fun, but we all love to win in order to get more points and crowns to exchange for suits. That is why in this guide we are going to give you all the indications for take victory in the test The Doors of Success.

The Gates of Success minigame is one of what is part of the category “Race” and that will be very familiar to you if you have seen or are followers of the television program Humor Amarillo, because the objective is identical to that of one of its tests which consisted of go straight through a few doors, among which there were a few true and others false. Well, exactly the same thing happens here.

The level is relatively easy, but contrary to what happens in Final Balance, here you will appreciate not being one of the first. More than anything, because the players who are more advanced are those who are more likely to jump up to a false door and get hit. For this reason, if you are further back, you can anticipate and thus go directly to the true door or one that no one has hit, since you will have more options to hit. 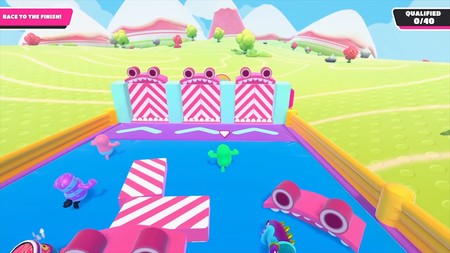 There is supposedly a trick that says the true doors are those narrower than the others, something that can be seen in the little triangle that appears at the bottom, as you can see in the image above. The point is that the pace of this minigame is so fast that, unless you have a sharp eye, it will cost too much to look at which of them is really smaller than the others, because the difference is not that it is so great.

In general, we recommend that you always jump and make a lunge, because in the case of finding the correct door that will make you advance further, especially with the last batch of doors, because from there you will rush towards a path in which you will only have to go in a straight line and reach the line of goal to qualify for the next test.

Mafia Definitive Edition has the blessing of creator Daniel Vavra

Crunch in CD Projekt for Cyberpunk 2077, some fans take it out … with journalists talking about it